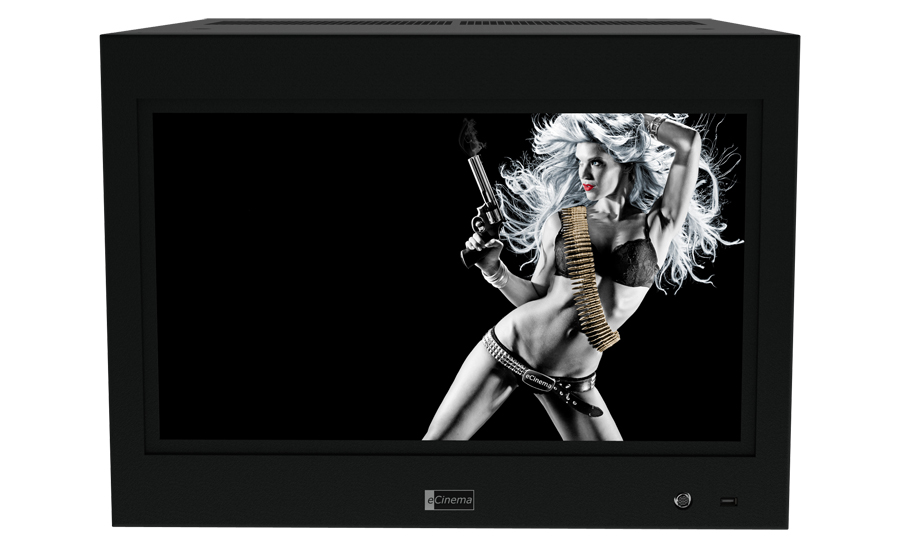 The eCinema DPX-2310 is the world’s first and only reference standard CRT replacement. Driven by our revolutionary Dark Pixel Technology™ , the DPX-2310 achieves 15,000:1 simultaneous contrast, fully reproducing the image quality of the industry’s best reference CRTs.

Since the introduction of the first LCD monitors for professional use, one serious limitation of LCD display technology has stood firmly in the way of adopting LCDs for most serious color-critical monitoring – BLACK LEVEL.

Previously, no acceptable technology has come to market to address the contrast ratio inadequacies of professional LCD displays. For the past five years we have been developing a revolutionary technology to break through the black-level barrier – and it’s finally ready for prime-time.

eCinema Systems’ innovative Dark Pixel Technology™ enables a contrast ratio of 15,000:1 for an extended deep black range previously unseen on any LCD display. You really have to see it to believe it.

Color gamut is most easily defined as a representation of the boundaries of reproducible color within a specified color space. The color space of HDTV is defined by REC709. At best, reference CRTs can produce slightly below 90% of REC709 gamut due to the limitations of the phosphors used to create red, green and blue light.

Since LCDs produce color by filtering light emitted from a backlight source, their gamut is actually a function of the backlight array. eCinema’s DPX-2310 utilizes our proprietary TruGamut™ wide-spectrum LED backlight system to achieve nearly 100% of REC709 gamut for the most accurate colorimetry available from a color video display.

Utilizing a native 10-bit LCD panel, the eCinema DPX-2310 can simultaneously display any one of 1073 million (1.07 billion) colors per pixel for the most accurate color image display possible from an LCD.

10-bit video streams can carry 4 times as much data and reproduce 64 times more color shades than 8-bit streams. The result is 1024 color steps for each red, green and blue channel that combine to produce over 1 billion individual color shades.

This produces more accurate colors with fine detail in the shadow areas and noticeably smoother transitions between colors, eliminating color banding and other artifacts. 8-bit LCDs are actually incapable of displaying over 98% of the color shades available in a 10-bit video signal!

Full resolution 10-bit color at the pixel is only possible if the video signal remains undiminished during processing. This is true because the image that is displayed on the LCD panel is converted from digital to analog at the final step of image processing. To ensure image integrity throughout the signal path, the DPX-2310 utilizes eCinema’s exclusive PureStream™ Image Processor to maintain a truly lossless internal signal processing architecture from input to screen.

Most monitor manufacturers limit bit depth during internal video processing between 10 – 24 bits. However, contrast, luminance, scaling, deinterlacing and other signal processes applied to the video stream can exceed those limitations. To squeeze all the data within the allocated range, downsampling of the original signal can occur in processing.

This practice can literally leave bits behind, thus altering the color accuracy of the image that is displayed on the LCD. PureStream™ processing eliminates image degradation and data loss thus ensuring that the input 10-bit signal is uncompromised throughout the entire data processing path, resulting in pristine, accurate detail and color reproduction.

While CRTs are no longer the standard for color viewing, many are still in use throughout the world. As such, reference LCD monitors need to be able to reproduce the characteristics of a CRT when mastering video that may be viewed on older television sets. eCinema’s iSIM (Interlaced Simulation Mode) uses high-rate 120hz scanning in combination with our proprietary Interlaced Display Emulation Algorithm (IDEA).

Unlike black-frame insertion methods, eCinema’s iSIM Mode produces an accurate reproduction of the on-screen physical characteristics of interlaced video with a minimal loss of luminance. iSIM Mode is standard on the DPX-2310.

This product is custom manufactured to order. Lead times and availability vary.